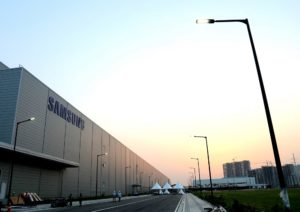 Samsung, the world largest mobile manufacturer has opened its new factory in North India, which is going to be the biggest phone factory in the world, giving a significant boost to the PM Narendra Modi’s Make in India campaign.

The factory was inaugurated earlier today by the Prime Minister of India, Mr. Narendra Modi and South Korea’s president Moon Jae-in. The factory is situated in the city of Noida, a common name in India’s IT landscape, and a part of the National Capital Region.

The factory, Samsung claims would be capable of churning out around 120 million smartphones a year and would be used for producing entry-level smartphones, which cost less than 100 bucks, to their flagship devices. It would help Samsung meet the growing demand for smartphones both in India and other countries.

The factory had a production capacity of 68 million until Samsung decided to pump in Rs. 5000- crore into the factory in order to expand its production capabilities. The expansion would be in phases and is expected to be completed by 2020. Samsung is expecting to export 30 percent of the devices produced at the factory.

The Noida factory was one of the first global electronics manufacturing facilities that were set up in India. The plant dates back to 1996. With the new expansion, it would be having an area of 32 acres ( approx.).

Samsung’s investment comes at a time when India has overtaken the US to become the world’s second-largest smartphone market, trailing behind China only.

Our Noida factory, the world’s largest mobile factory, is a symbol of Samsung’s strong commitment to India. We ‘Make in India’, ‘Make for India’ and now, we will ‘Make for the World’. We are aligned with government policies and will continue to seek their support to achieve our dream of making India a global export hub for mobile phones,” said HC Hong, chief executive officer, Samsung India.

Tips of How to Choose the Best Karaoke Machine