Last week, the promo poster of the Nokia 5.1 Plus device leaked out on the internet. The poster includes the price tag of CNY 799 (Rs.8289) for the 32GB variant and CNY 999 (Rs.10364) for the 64GB variant. So, the Indian price will be quite higher from Chinese market price. The Nokia 5.1 Plus will come with a notch display design. It could be powered by MediaTek Helio P60 or Qualcomm Snapdragon 600 series processor along with 3GB/4GB and maybe 6GB RAM variant. 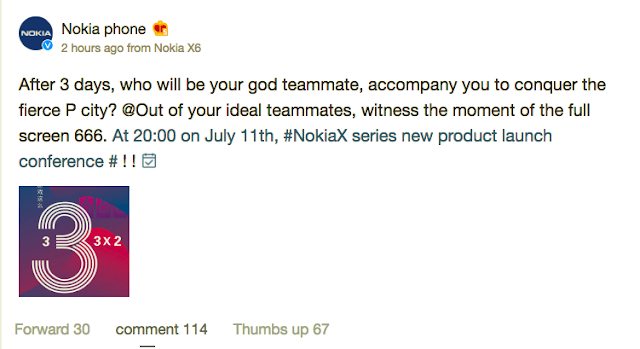 The Nokia 5.1 Plus could feature a 5.86-inch HD+ display with the resolution of 720×1520 pixels. It will have dual rear camera setup of the 13MP+5MP sensor. The model number TA-1109 has been received Bluetooth 4.2 certification and that could be the Nokia 5.1 Plus handset. The device will have a rear-mounted fingerprint sensor and Ai-based Face Unlock feature as well. The notch contains a front camera with an earpiece setup. The device display will be an 18:9 aspect ratio display with round curved edges and Nokia branding at the bottom for the premium look.

The device could go for pre-sale on JD.com. The teaser is up on Sunning and TMall also. However, the first poster of Nokia X5 (2018) mentioned that the HMD Global will announce Snapdragon 845 and Snapdragon 710 powered devices very soon.