Moto G5 Plus gets the April 2018 Security Patch Update

Moto G5 Plus, the mid-range device released by Moto last year at the MWC’ 2017 is now getting the April Security Patch, in an OTA update released earlier today.

Featuring a Snapdragon 625 SoC, 5.2 inches Full HD Display (1920 x 1080), the Moto G5 Plus became the best mid-range device earlier last year and blurred the line between the flagship and the mid-range by offering a device that felt a bit premium to hold and had the stellar performance for its price point.

The G5 Plus came with stock Android 7.0 Nougat and is scheduled to get an update to Android 8.0 Oreo sometime in the future. 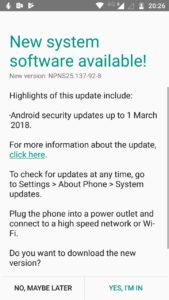 The latest update is another indication regarding the lapses in Moto’s update policy which has significantly gone down since its acquisition by Lenovo in 2014.

The April security patch contains among others, fixing of vulnerability in the Android runtime environment, which would have enabled any remote attacker to gain additional permissions by bypassing the user interaction requirements. A vulnerability in the Android framework has also been patched, which would have otherwise enabled any application to bypass the OS protection which isolates any applications data from other application data.

For the complete changelog regarding the April Security Patch, feel free to check the Android Security Bulletin.

The complete changelog (from Motorola) for the updates reads:

This update introduces changes including the following:

May Security Patch- What all is patched