J7 Duo, the latest from the South Korean smartphone giant in its budget line of smartphones has been launched in India for a price of Rs. 16,990. The device is the first in the J series of smartphones to get a dual rear camera setup, as Samsung tries to re-focus its strategy in one of the world largest mobile markets, after reportedly being overtaken by Xiaomi in quarterly sales.

The J7 Duo is powered by a 1.6 GHz Exynos 7 Series processor, Samsung’s in-house SoC. It is fueled by a 3,000 mAh battery and has a memory/ storage configuration of 4GB/32GB and support for expandable storage up to 256GB via microSD card. 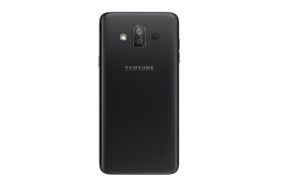 has a 13-MP and 5-MP sensors on the back each with f/1.9 aperture and as of now, there is no information about the nature of the second lens, whether it is a telephoto or wide angle or monochrome or a regular sensor. The front camera is an 8-MP f/1.9 sensor with LED Flash also. The device is capable of recording full HD videos at the rate of 30 fps (frames per second).

The device comes with Android 8.0 Oreo out of the box and has features like the App Pair, which lets opening and working on two apps simultaneously.

Features like Beauty Mode, Selfie Focus, and Face Unlock are also present on the J7 Duo.

The back panel of the device is removable and on the front, the home button houses the fingerprint sensor also. It also has the, until now mostly seen in flagships, dedicated Bixby button also.

Regarding the smartphone, Mohandeep Singh, senior VP, Mobile Business, Samsung India had said,” With Galaxy J7 Duo, we are attempting to drive next level innovation in the J series that rules the hearts of Indian consumers. The introduction of the dual camera in Galaxy J shows that we listen to our consumers and bring meaningful innovations that help enhance their lives. The superior specifications along with other innovative camera features in Galaxy J7 Duo will further consolidate our leadership position.”