The Nokia 6 2018 has finally been launched by HMD Global in India.

The device was released as a China exclusive in January’ 18 and then made its global debut at the MWC’ 18 in Barcelona and over the past fortnight, it is starting to make its debut in other countries worldwide. It is a successor to the Nokia 6 released over a year ago in the same destination, MWC’ 17.

The Nokia 6 2018 is cast from a single slab of 6000series Aluminum giving the phone unbelievable strength, making it one if, if not, the strongest smartphones worldwide. It has a 5.5 inch FullHD IPS LCD screen (1920×1080) and has an aspect ratio of 16:9. The screen is protected by Gorilla Glass protecting it against minor scratches.

A Snapdragon 630 SoC powers the device, a massive improvement over the Nokia 6 2017’s 430. It is an octa-core processor with four cores clocked at 2.2GHz and two at 1.8GHz. It is coupled with 3GB and 4GB of RAM and 32GB and 64GB of storage respectively. A 3000 mAh battery powers the device providing 16 hours of talk time and 507 hours of standby time.

For imaging, HMD Global is supplying a Zeiss powered camera. It has 16MP back camera if it seems a bit of a disappointment over the other dual camera smartphones out there don’t forget that Google Pixel with a single camera outperforms most of the dual cameras in the market, with f2.0 aperture. The front camera is an 8MP sensor this time also with f2.0 aperture.

Since it features a Zeiss Optics Camera, it would be getting the Nokia pro camera app also. 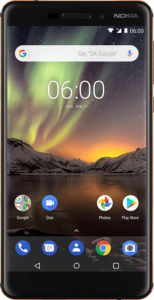 The Nokia 6 2018 is a member of Google’s Android One program. It implies quick updates for consumers, like HMD Global hasn’t been doing it yet and would come with zero, or almost no bloatware.
It would ship with Android Oreo on-board.

It has support for fast charging also, something that wasn’t there in the previous one.

Airtel is offering a cashback offer of Rs. 2000 along with a subscription to Airtel TV app until the 31st December 2018.

And yes, it has a headphone jack also along with USB- C and Bluetooth v5.0.