Samsung Galaxy S9 and S9+, two of the best flagships at the moment in the market are about to get a new counterpart with, if the speculations are to be believed, Samsung about to release the S9 Mini, an iteration of its flagship phone catered for the consumers on a tight budget.

Samsung had once made it a trend to launch a smaller iteration of its flagship device right till the S5 Mini. After that, the mini line was discontinued. The S5 Mini had a 4.5- inch display, down from the 5.1- inch on the Galaxy S5

The leak of a GeekBench listing of a mystery device with a model number of SM-G8750 is fueling the speculations with the Samsung Galaxy S9 having a model SM-G960F. 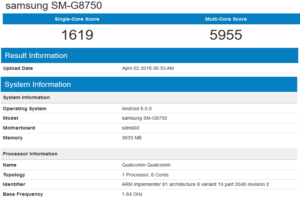 According to the Geekbench listing, the device would run Android 8.0.0 Oreo and would be powered by Snapdragon 660, an octa-core processor from Qualcomm and would be coupled with 4GB of RAM and 64GB of internal storage.

The device is also speculated to arrive with an infinity display, though it may be smaller in size as compared to the Samsung flagships, safe to assume one between 5- inch and 5.5- inch AMOLED panel.

And in the camera department, whether Samsung equips it with the dual- aperture camera, or a dual camera setup remains to be seen, which as of now have not been mentioned.

Currently, there are no details about its pricing and availability, and it may be possible that the device may be a part of the J- Series or the A- Series.

The device can be expected to have a price near $400 and an announcement in the coming months.

Until an official announcement or further leaks, take this information with a pinch of salt.

P.S. The above camera visual belongs to the Samsung Galaxy S9+ and not the speculated device

Must Read: Three new smartphones launched by Nokia in India

Xiaomi Mi 7 will have an in-display fingerprint scanner