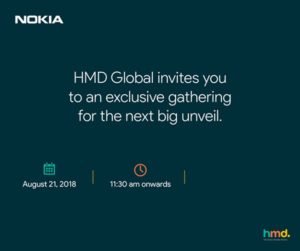 HMD Global is sending out invites to the media for a launch event in India on the 21st of August 2018. At least one Nokia branded smartphone is expected to make their debut in the country in the event, with the invitation reading, “HMD Global invites you to an exclusive gathering for the next big unveil”.

The Nokia 6.1 Plus is expected to be the smartphone to be unveiled at the event along with possibility arising that HMD Global may unveil the Nokia 5.1 Plus also.

The Nokia 6.1 Plus was first unveiled in Hong Kong on the 19th of July. The device is an international version of the Nokia X6, which was released in China earlier this year. The device’s support page went live a few days earlier in the country, though it was soon taken down. Furthermore, it also read that the device follows the rules set by the Department of Telecommunications, India with the official guide mentioning, “ Your mobile device is also designed to meet the requirements for exposure to radio waves established by the India Department of Telecommunications. These requirements set a SAR limit of 1.6 W/kg averaged over one gram of tissue”. 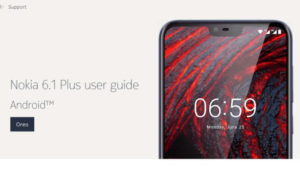 The Nokia 6.1 Plus is a part of Android One programme, much like the Nokia smartphones released this year. The device is similar in specs with the Nokia X6.
It has a 5.8- inch Full HD+ display with a 2.5D Corning Gorilla Glass 3 and an aspect ratio of 19:9 and resolution of 1080×2220, in fact, the Nokia X6 was the first Nokia smartphone to jump into the notch wagon. An octa-core Snapdragon 636 powers the device. For imaging, the device comes with two sensors on the back, the primary one a 16- MP one and the second one a 5- MP one and with an aperture of f/2.0. The front sensor is a 16MP f/2.0 aperture one. Like most of the smartphones out there in the market, the device also comes with some nifty AI features like portrait lightning effect, depth of field and optimized color contrast in images. IT has support for HDR mode and bothie also.

Android 9.0 Pie is now official and rolling out to Google Pixel Smartphones