After a cancellation and an overhaul right from the drawing board itself, the LG G7, or the LG G7 ThinQ, as the company calls it, has seen the light of the day as LG unveiled the device at an event in New York today, with a Korean launch in Seoul tomorrow. 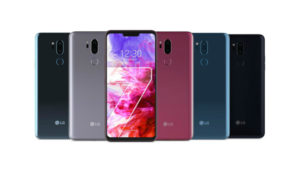 The G6 G7 ThinQ comes with the ThinQ branding which LG has been giving to its home appliances lately and, from the V30S ThinQ, started to five it to their mobile devices also. The ThinQ is a sub-brand of the company that brings together all the consumer electronics and premium appliances under a single banner. ThinQ products are laced with artificial intelligence and are able to intercommunicate and provide customized and better services making use of LG’s deep learning technology.

The display is the most exciting thing about the G7 ThinQ. The device features a display that is having a maximum brightness of 100 nits making viewing under direct sunlight possible, more on that in another article.

The L6 G7 ThinQ has a dual camera system with each lens of 16MP. LG is keeping the wide angle secondary lens, which was there in the V30, V30S ThinQ, and the G6 also. Like the V30S ThinQ, this device also features those nifty little AI tricks also which can be found here.

LG claims that it has taken low light photography to another level with the G7 ThinQ as it would now enable users to capture images which are four times brighter than its predecessor, the LG G6. The images would lack the graininess that creeps into images shot in the dark.

The front sensor is an 8MP wide angle one and it also packs some nifty tricks up its sleeve.

The device is powered by a Qualcomm Snapdragon 845 SoC, in line with other 2081 flagships. It has memory/ storage configurations of 4GB/64GB. A 3,000 mAh battery powers the device giving it sample juice to last the whole day.

The device packs some really cool audio tricks up its sleeve. So much so that there is an entire post dedicated to it, which you can check here.

Like the Samsung’s flagship series of late, the LG G7 ThinQ has a dedicated AI button also, but this time the button is there to summon the Google Assistant. For more on LG G7 ThinQ’s AI capabilities, feel free to check this link.

The device has support for Quick Charge 4.0 and comes with wireless charging functionality also, something LG has been offering for quite some time. Apart from that, the device is IP 68 water resistant also, and they did it by keeping the headphone jack also.

LG has increased the color availability for its flagship this time with the LG G7 ThinQ available in four color options, viz. the Platinum Grey, Aurora Black, Moroccan Blue and the Raspberry Rose.

Pre-orders begin on 24th May in the United States with the details on regional availability yet to arrive.