by Abhinandan Jain
in Android Tools 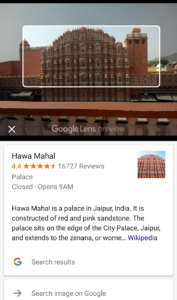 put in simple words is a virtual search engine. The app uses some heavyweight algorithms to scan the images, or videos or even live feed and provide contextual information. Like point to a business card, and the details would be automatically saved as a contact, point to a book to check its reviews. You can also get details about paintings in museums, information about landmarks, restaurant or hotel reviews just by pointing your camera at it. All of this, makes it sound similar to Bixby, and it is kind of.

Some more cool stuff that the Lens can do is point out the breed of the cat or dog, or connect to a WiFi network just by scanning the routers settings sticker.

The feature is being rolled out in stages, and there may be a chance that you might not be able to access it at the moment for Android users. As for iOS, there is currently no release date in sight.

The feature can be found next to the delete button in the photos app, from where it can be accessed. After that, it would scan your image to provide relevant information

Rolling out today, Android users can try Google Lens to do things like create a contact from a business card or get more info about a famous landmark. To start, make sure you have the latest version of the Google Photos app for Android: https://t.co/KCChxQG6Qm
Coming soon to iOS pic.twitter.com/FmX1ipvN62

As we all know, the Android OS and Android devices are easily customizable than iOS running devices. Each and every...

Huawei Mate SE Launched in the US