The OnePlus 3 and 3T receive the new version of the Open Beta of Android Oreo!, OnePlus is one of the most popular brands today, a giant in the Android world that has earned its place thanks to the terminals that it has been launching into the market. Its quality is undoubted, and that is that the price is very competitive, so much so that nobody offers the quality/price ratio that characterizes it so much.

Since a few days, the Asian company has returned to be the protagonist and is that its new terminal could be closer than ever. Yes, it has not been long since the presentation of OnePlus 5 and we have here the new version, the OnePlus 5T that comes with a screen 18: 9 to compete with the rest of rivals.

Also Read: [Download] The Open Beta of Android Oreo is now available for the OnePlus 3…

The  OnePlus 3 is a model that comes to be part of the high-end product, but always with the special way that this Asian manufacturer works. The fact is that this terminal arrives with a screen of Optic AMOLED 5.5 inches Full HD that ends in 2.5D and, therefore, offers a slight curvature of lace with the carcass. By the way, this is metallic and, therefore, does not have much to envy to its competition (the thickness is below 8 millimeters).

As regards the main hardware, the OnePlus 3 has a Kryo quad-core Snapdragon 820 processor operating at a frequency of 2.2 GHz (2x 2.2 GHz, 2x 1.6 GHz). The architecture is Cortex-A72 and the integrated GPU is an Adreno 530. As far as RAM is concerned, the OnePlus 3 includes 6 GB, which is in line with the current high-end. There is no missing fingerprint reader in the Homefront button.

The main camera is 16 megapixels and the front for selfies is 8 Mpx. In this way the OnePlus 3 complies with what has already become habitual in the most powerful models, also the flash is dual, so its help is most useful. This terminal comes with Android Marshmallow pre-loaded (with OxygenOS), comes with 64 GB of internal storage.

Finally, the OnePlus 3 arrives with WiFi connectivity ac and, in addition, with NFC and USB type C, which ensures a fast recharge of its 3,000 mAh battery (compatible with Quick Charge 3.0 and Dash Charge). This phone is Dual SIM type and has compatibility with LTE networks.

The OnePlus 3T is placed in the catalog of the Chinese manufacturer as the vitamin version of the OnePlus 3. Among its improved features is the Qualcomm Snapdragon 821 processor, a battery with greater capacity and autonomy, as well as a front camera with a higher resolution sensor. The software also varies with the integration of OxygenOS 3.5 based on Android Marshmallow pre-loaded.

Well, we have not come to talk about the company’s new smartphone, but two of their spoiled children, the OnePlus 3 and 3T. And not long ago we told you that they had received the Open Beta to try Android Oreo.Well, today they have received a new update for it, do you want to know what it brings? Let’s go see it!

The OnePlus 3 and 3t receive a new update

That’s right, a few minutes ago that users of both terminals have received notifications. In the case of OnePlus 3 this is the Open Beta 26, and in the case of its big brother, the OnePlus 3T, we are talking about Open Beta 17, we are going to see what’s new. 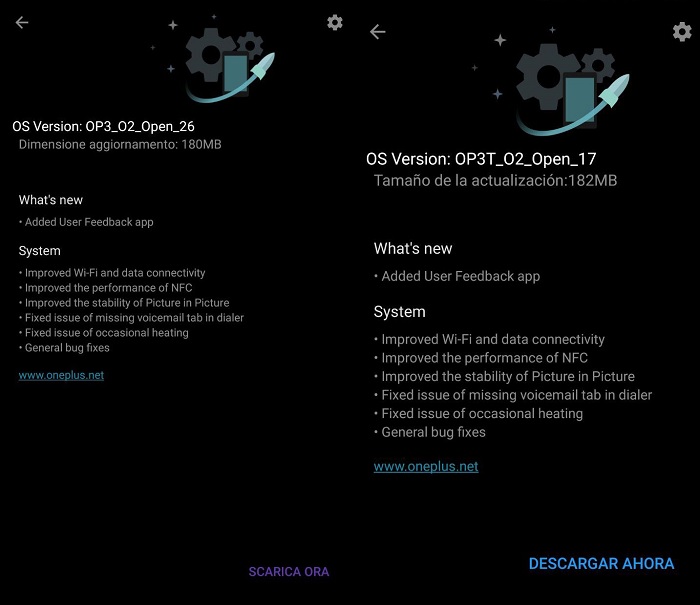 There you have both updates, in the case of OnePlus 3 weighs 180 MB, only two less than in the OnePlus 3T, however, the news, improvements, and corrections are identical, so let’s see them.

These are the improvements and corrections that the company has carried out for two of its most successful terminals, so you know, if you have any, you can now update to the new version of Open Beta.

And you, do you have a OnePlus 3 or 3T? Are you going to update?