The Samsung Galaxy J5 (2017) receives an update and is protected against BlueBorne, Currently, users want to have their devices updated to the latest version of all services. Something logical because we need to have the latest to enjoy better performance of the terminal and all the new features included.

But if the update is to solve problems related to security, much better. The manufacturers know this, that is why they put their batteries to try to bring us the latest security patches, in order to be more protected than ever, and Samsung has just done with one of its mid-range terminals, the Samsung Galaxy J5 ( 2017).

Samsung is doing well in the mid-range, is that like it or, large companies must adapt to the bets of Chinese companies that can afford to lower prices and add better hardware to their devices. And even these companies put a lot of pressure on the high end.

The Korean company, for its part, is betting very strongly on its own processors, and this is giving a lot of life to its mid-range since the optimization carried out by Samsung is quite decent, and also saves costs of buying the processors from other companies.

The Samsung Galaxy J5 Pro has dimensions of 5.2 inches. The technology is Super AMOLED, owned by the firm, and is endowed with a resolution of 1280 x 720 pixels.

The external design of the  Samsung Galaxy J5 Pro follows the design guidelines of the Galaxy J range of the firm, which in turn derive from the highest range models, such as the S8, S7, and S6. As it could not be less, the front part has a fingerprint sensor.

The Samsung Galaxy J5 Pro processor is, specifically the 7870 eight-core model that operates at a speed of 1.6 GHz. In the graphics part, we have a Mali T830.

The RAM is 3GB that is completed with the 32GB of internal memory plus the 256 GB it supports in the case of inserting a microSD memory.

The rear or main camera of the  Samsung Galaxy J5 Pro has a resolution of thirteen megapixels, which is completed with a front of the same resolution. It is clear that it is a model that focuses on the front camera and selfies, something that is becoming stronger every day.

The autonomy of this model is guaranteed by a battery that has 3,000 mAh. It can be considered an optimal size, given that we have a screen that does not reach the levels of phablets, does not have an extra quality which does not impact much on consumption and we have a processor that also does not achieve high levels of prosecution.

This is reported by GSMArena, the Korean giant is starting to launch a new update for the Samsung Galaxy J5 (2017), especially for European units, an update that weighs 392 MB and probably already found on our terminal.

There are few news that brings this new update that comes as J530FXXU1AQI3 version, however, offers something that all users of this terminal expected, protection against BlueBorne malware that appeared a few weeks ago. 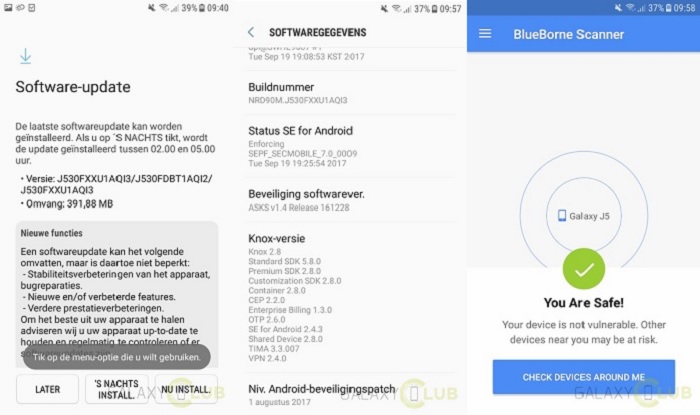 Do not you know what it is about? BlueBorne is a malware that attacks your smartphone via Bluetooth, that is, it can enter and take control of your smartphone. It affects many devices, not just smartphones, but everything that has an Internet connection and Bluetooth connectivity.

So if you have a Samsung Galaxy J5 (2017) do not think more, access the settings of your phone and check that you have the update. If not, access “Updates manually” and see if you leave, is more important than we think.

Are you going to update your Samsung Galaxy J5 (2017)? Did you expect the update?

How to disable battery usage notification on Android Oreo