The HMD Global is unstoppable in terms of providing the major Android updates to their Nokia smartphones. As we all know that Nokia devices have a very good update track record according to faster and frequent Android OTA updates. While some of the other so-called best and No.1 smartphone brands aren’t capable of delivering the expected updates within a time frame. A few weeks ago, Nokia 8 handset was updated to Android Pie and now the Nokia 8 Sirocco gets Android 9 Pie update officially.

Some of the Nokia 8 Sirocco device users have mentioned that the update has arrived for the model. HMD Global provides gradual roll-out process to the all Nokia devices based on the stable or beta version. So, it will take a few weeks to receive the OTA update globally. Most of the Nokia devices runs on Android One platform from Google which ensures the latest and faster Android + security patch updates. 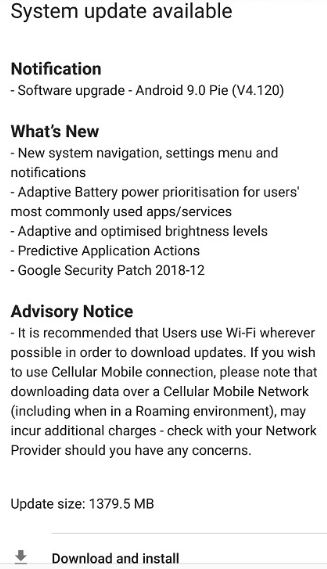 The Android 9.0 Pie version brings App Actions, App Slices, Adaptive Battery & Brightness, Notification UI, media volume UI, App Timer etc. The most preferred feature in Android Pie is the swipe gesture navigation control option and recent UI. This version also introduces Digital Wellbeing feature which will let the user control the device use on a daily basis. The update size is around 1380 MB and comes with the December Security Patch update. The Pie update version for the device will be V4.120 Android Pie.

Download and Install OxygenOS 9.0.2 for OnePlus 5 and OnePlus 5T