Google is preparing very important news for its SMS and RCS service. Android Messages will receive a web client in the style of WhatsApp Web or Allo, but more importantly, it will acquire the function of sending messages via Wi-Fi or data to compete with iMessage.

Android Messages is the default SMS application that comes standard on Android devices today. It is an application offered by Google, which is also compatible with RCS. The Rich Communications Services are the next step in the evolution of SMS, in an attempt to prevent its demise. Basically, it makes these messages gain the same capabilities as WhatsApp messages, being able to send photos, location, invoices, group chats …

The main disadvantage of this service is that there is still no interest from the operators, so in the end, it seems that Google will be the necessary steps for its implementation. And it will do so, first, by creating a web client for Android Messages. it’s operation? Scan a QR code to be able to login in any browser and on any PC, with several devices at once. You will have a notification on your mobile that tells you that you are using the web service and you can choose to close sessions individually. Basically, the same as Allo’s web service. 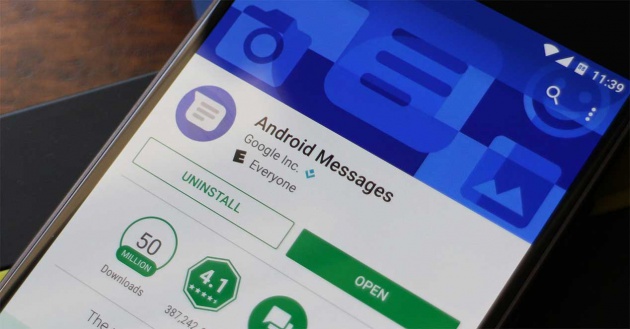 iMessage is a chat service exclusive to Apple devices. It stands out especially for its instantaneous mix of SMS and Wi-Fi services. Basically, how to mix the old SMS messages with WhatsApp in a single application, able to talk to anyone, whether or not they have iMessage. It is a competitive advantage for Apple in the United States, where SMS is still a popular communication option. Many users are kept on iOS exclusively by iMessages.

For a long time, users claimed that Android had a similar service, which allowed to channel conversations with the same person in the same application, being able to establish conversations whether or not an Internet connection. It seems that, finally, Google is working on something like that, as revealed by Android Police in its analysis of the code of the app. A new message will inform about the possibility of sending messages through Wi-Fi or data using Android Messages, replicating the operation of iMessages. Google would be in charge of the system since it seems that it has tired of waiting for the operators to implement RCS. The last of the novelties will be a payment service, to send money just like with WhatsApp Pay.

WhatsApp activated a payment system between users (UPI Based)