by Varun Kesari
in Featured, How To Guides

How to make and share cartoons with the Samsung Galaxy Note 8, The Samsung Galaxy Note 8 is the company’s current flagship device, has very good features and a multitude of options and extra configurations, thanks to its customization layer, and of course, its famous S Pen, the small digital pen that includes the device, for much more than taking notes. With the Note 8, the S Pen came with new features, such as Bixby integration or new shortcuts. One of the most outstanding novelties is the possibility of creating messages and cartoons with the pencil. Next, we’ll show you how to do it and how you can share the drawing with your friends.

In order to use this feature, obviously, we will need a Samsung Galaxy Note 8 and its corresponding Spen. When extracting the digital pen from the device, the menu will appear with the different options, and we will have to select the option that says ‘Animated message’. This option appears one of the first in the S Pen categories. If you can not find it, go to the option to add shortcuts and look for the drawn heart icon. When pressed, a black box will appear in the lower area to make the drawing or even an animated message.

The Samsung Galaxy Note 8 packs Super AMOLED technology characterized by points such as its frameless design and 18.5: 9 aspect ratio Gorilla Glass 5 2,960 x 1,440 pixels 6-inch Screen. The processor of Samsung Galaxy Note 8 has been inherited from the previous Galaxy S8, the Samsung Exynos 8895. The storage system of the new Samsung Galaxy Note 8 consists of a high-speed 64 GB UFS memory chip. With regard to RAM, the new phablet raises this technical data up to 6 GB.

The rear camera of the Samsung Galaxy Note 8 is a dual 12MP camera, one is a wide-angle lens and the other is a telephoto-lens. Which gives the phone a functionality to capture Portrait pictures. Regarding the front camera of Samsung Galaxy Note 8, the firm has opted to give continuity to a sensor with eight-megapixel resolution and optic with aperture f / 1.7.

The Samsung Galaxy Note 8 battery offers a maximum capacity of 3,300 mAh. It is compatible with the brand’s fast charging technology, as well as including wireless charging. The connection section of the Samsung Galaxy Note 8 has support for the USB-C interface, as well as a mini-jack for headphones – AKG model included in the pack. In the wireless section, the highlight is in charge of the Gigabit cat.16 connectivity, as a previous step to the 5G connections. In this sense, the phablet also includes WiFi dual-band ac connection, WiFi Direct, MIMO technology and assisted GPS. It also offers Bluetooth 5.0 and other wireless features such as the NFC connection for mobile payments, either through Android Pay or Samsung Pay.

Among the additional features of the Samsung Galaxy Note 8, we find the characteristic optical stylus S Pen. In the new generation of the phablet, we detect a pointer with great sensitivity of 4,096 pressure points, as well as a tip of 0.7 millimeters. The pointer can be used on the screen of the device without it having even been turned on. Additionally, it has a specific software suite with apps such as Live Message, Screen Memo, translator, and PenUp.

Various colors and the possibility to choose a background to draw 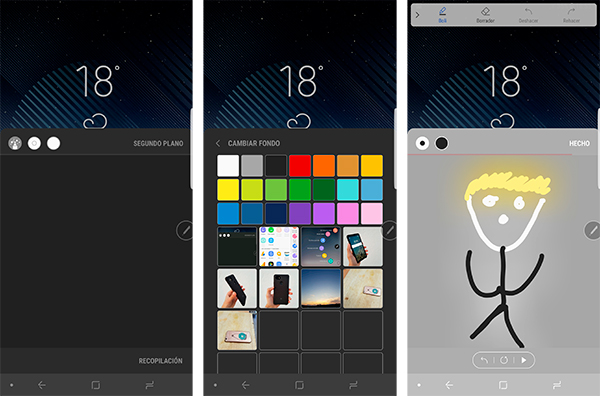 In the upper left, we find several options. The first one gives us the possibility to choose between a brush, a ballpoint pen with shadow effect and a marker with a bubble effect. We can also choose the size of the pointer, and finally choose between six different colors. On the other hand, we can choose the background color by selecting the option ‘Second Plane’, located at the top right. We have a lot of colors. In addition, we can choose a photograph of us as a background. Once all the options have been selected, we can start to draw.

In the lower area, we can undo the last drawing we made, start over or reproduce it. We must emphasize that we only have a small time to draw because when sharing the file, it will be done in GIF format. Once the drawing is created, click on the ‘Done’ button and it will save the image. In the same location, we will see a button to share. The panel will open to share it with different applications, select the desired option and the drawing will be sent as an image in GIF format.

Download HTC U11+ and U11 Life Stock Wallpapers On Any Smartphone