After releasing the Huawei P20 Lite as the Nova 3e in a couple of Asian markets including China, Huawei is heading towards a new device called Huawei Nova 3. This device is same as Huawei P20 smartphone in the overall specifications and looks. Recently, Huawei teased a poster of the Nova 3 phone in Weibo. The company also mentioned that they tied up with the TFBoys, a Chinese boy band, to show this upcoming handset as a brand ambassador. It also claims that the collaboration will be going to “start a new journey with Millennium and join hands in creating a beautiful era of Nova Planet”. That means the handset will come with mid-range flagship-grade features.

There are two smartphones such as PAR-AL00/TL00 had recently spotted in TENAA and gets 3C approval in China last month. So these two models will be the most probable variants of Huawei Nova 3. The Huawei Nova 3 smartphone supposed to be codenamed as ‘Paris’. In the given images we can see that the device is fully covered with glass and gives a premium look. The back side has a dual rear camera setup with LED flash and a dedicated fingerprint sensor. The back also looks purely like Huawei P20 Lite. 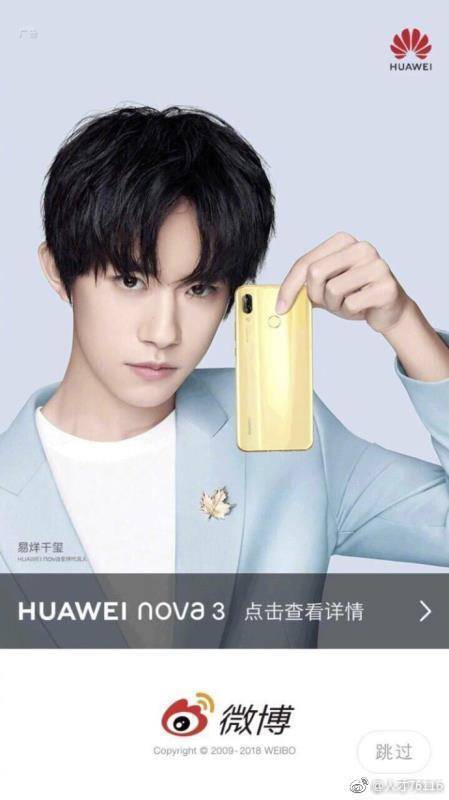 The Huawei Nova 3 could be powered by the octa-core Kirin 710 SoC. This is the successor of the last generation Kirin 659 chipset and it’s based on Cortex-A73 CPU architecture using a 12nm node at TSMC. The Kirin 710 SoC is featured with NPU (Neural Processing Unit) for AI-powered tasks. This could definitely take on the Qualcomm Snapdragon 710 SoC because the SDM710 doesn’t have any NPU architecture. The Snapdragon 710 chipset fully relies on GPU and DSP (Digital Signal Processor) tasks. However, Snapdragon 730 SoC might feature NPU (NPU120), provided by Samsung’s 8nm LPP process.

The Huawei Nova 3 is expected to launch in July this year. Though, there is no information about the other specifications and features along with price and availability. We have to wait for few days to get some leaks and reports.