Download the Google Pixel 2 ringtones on your phone, When personalizing our Android smartphone we can use the themes associated with each layer of customization of each manufacturer or download tones, wallpapers and sounds individual. If you prefer this second method, with much more control for the user, you can now download the notifications, alarms, and ringtones of the Google Pixel 2 on your mobile.

The last time Google developed new alarm sounds, notification, and ringtone for Android was for the original Google Pixel and Pixel XL. Maybe this will become an annual tradition because Google has done the same with the Pixels this year, the same ringtones of the Google Pixel 2 XL that appear in the Google Pixel 2.

The Google Pixel 2 XL & Google Pixel 2 is positioned as the generational relay of the Google Pixel XL and the main and most marked difference of this second generation of Google smartphone is the adoption of the concept of mobile with screen without frames. It is also be the first phone to have a score of 98 points in the DxOMark camera tests.

Google has a difficult task for this second half of the year, to compete with the two most expensive terminals that have been made in history: Note 8 and iPhone X. Google has been betting on a truly innovative design – case of the XL version. The Pixel 2 is the small version and we could also say “cheap” version XL , because it is cheaper but still placing in the premium high range. We found a 5-inch screen with FullHD resolution. Its design, as we see, is not the most innovative in the market, as Google has opted for a version with enough frames, but with two speakers on the front that can justify.

We find software additions such as a renewed Pixel Launcher that will leave us with more usability, a function of listening to the song at all times, whether or not the mobile is off, and to show us the song that is being played back in the main screen. Other details to highlight is artificial intelligence. Google bets everything by its assistant to be able to do all kinds of functions, and of course, it is finally available in India. Both Pixel have Always on Display, a feature we’ve already seen in other brands. 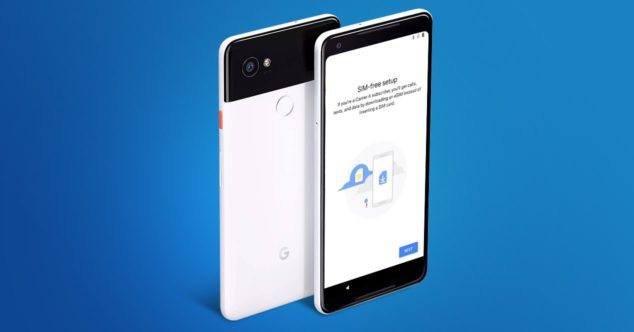 This time the boys of Android Police have been responsible for extracting the notification tones, alarm tones and ringtones of Google Pixel 2 so you can download and apply to your mobile in a simple way.

All the previous sounds have been replaced by the notification, alarm and call tones that we show you below:

You can download them from their respective links and then simply place the files in the Alarms, Notifications and Ringtones folders that you will find inside your phone’s storage (/ sdcard /) to see them in the sound selector. This way you can turn your smartphone into a Google Pixel 2, at least in the sound aspect.

In addition to applying all the ringtones of Google Pixel 2 on your smartphone, you can also completely alter the interface of your Android thanks to the Google Pixel 2 wallpapers that are already available on the Web.

As we shared earlier more than 40 wallpapers of Google Pixel 2, some wallpapers that are classified into three distinct categories. With these funds, we can dress our Android phone  in a way much more similar to the new Google mobile. Because they have a size and resolution enough to fit any screen of a mobile, regardless of the manufacturer or the screen resolution we have.