It is not wrong saying that the G- Series is the best selling series of Moto. IN fact, it might be the only series in the company’s lineup that drives sales in large numbers. IN fact, its sales might even be larger than the parent company Lenovo’s own mobile division sales.
So, it is not completely off the board when ti was leaked that Moto is planning to release four G- Series devices the next year, after the company’s G6 Series for this year got dwarfed under the competition, and didn’t get the mass market numbers as the G5 series had got a year earlier.

The Moto 67 Power, one of the upcoming devices from the Moto G Series has now been leaked through an FCC listing, suggesting that the device may be launched in the initial months of the next year itself.

The highlight of the Moto G7 Power is said to be a 5,000 mAh battery, the inclusion of which has been confirmed by the device’s certification listing. The listing has further revealed the device specifications, rear design, and connectivity information among others.

According to the FCC listing, the Moto G7 Power is said to be having dimensions of 159mmx76mm, with the diagonal measuring 167mm. From the diagonal, a screen size in the range of 6.0 inch- 6.3 inches can be expected with a display notch also. 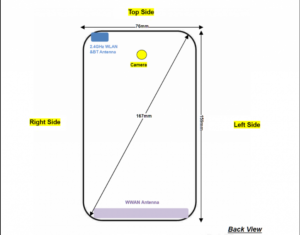 The device would come with support for NFC also, enabling the user to make mobile payments, though that feature’s availability would vary region by region.

AT the back, the device would be sporting a single lens setup, in the traditional circular housing which is now unique to Moto smartphones. The Moto logo at the back would be housing the fingerprint sensor also, right under the camera module.

The device is expected to further carry an octa-core Qualcomm Snapdragon 632 SoC on board, though that is only a speculation at this point.