The Helio P90 SoC will be powerful, energy efficient, and fully loaded with advanced AI.

According to the company, the Helio P90 chipset will change everything in terms of advanced AI features, machine learning adaptability, energy efficiency, and power pack performance. A recently leaked report mentioned that a new device is coming with Helio P80 chip which has been already tested in AI Benchmark. However, there is no information about the Helio P80 processor right now officially but the P90 is on the way to make the debut. 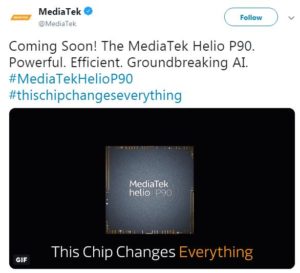 It’s also expected that the Helio P80 could be skipped and the Helio P90 SoC will be announced instead of P80. If this is true, then the company will definitely want to deliver a powerful and advanced AI capable chipset to their users. MediaTek confirmed officially about Helio P90 that “This Chip Changes Everything”. That simply indicating the AI capabilities and performance ratio in terms of other upper mid-range processors in the market.

There are no detailed specifications revealed yet by the company. So, we have to wait for some more leaks and reports. But we’re pretty much sure that this chipset will compete Qualcomm flagship processors up to some extent.