by Abhinandan Jain
in Android Tools

Another update has been rolled out for Microsoft Launcher Beta on Android, this time with a truckload of new customization options.

Microsoft Launcher has over time become one of, if not the best Android launcher out there. The way it integrates with tons of other services from the company has given it a large user base.

The launcher initially started as an experimental app by the Microsoft Garage, an in-house division which explores some of the wackiest ideas and turns them into a reality. There the launcher gained some great features, some of which made people ditch other launchers for this one. After its success, it was incorporated into the main company and continues to grow with the company adding tons of features periodically. Like recently Cortana was incorporated in the launcher, which even with the presence of Google Assistant on the device, manages to impress with its cross-platform combability with my Windows 10 PC.

So history aside, with the latest update, there are some UI changes and more customization options have been provided. 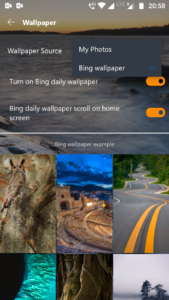 Another feature, which some people may find useful is that the source of the daily wallpaper can now be changed. Earlier, only Bing wallpapers were supported but now the custom wallpaper can be chosen from pics from the gallery, and they would be rotated on a daily basis, in a way similar to what happened with Bing wallpaper.

An update has been given on controlling the badge notifications. There are now customizable to a certain extent. Another change to notification delivery is that the calendar events would now be displayed on the lock screens.

Apart from that, there are the usual under the hood performance improvements and bug fixes, among which one of them stopped didn’t allow users to report the feedback properly.

Here is the complete changelog for the update.

○ Support both move & clone when moving apps in app drawer to form a folder;

The update rollout for normal users can be expected in a couple of weeks at most after the beta testing is complete.

For users who still have not downloaded the launcher here is the download link.
Play Store

Lenovo teases the S5 ahead of it’s Indian launch

As we all know, the Android OS and Android devices are easily customizable than iOS running devices. Each and every...

Lenovo teases the S5 ahead of it's Indian launch