A few months ago in last year, Huawei had announced that they will provide the latest EMUI 9.0 update to almost 9 smartphones. It includes the flagship devices like Huawei P20/P20 Pro and Mate 20 series as well. The company has started the EMUI 9.0 roll-out process from last year and already provided to Huawei P20 series. Now it’s rolling out to a few more devices from the list including Honor brand as well. Such as Honor Play, Honor 10, and Honor View 10 devices. Here is the list:

Now the EMUI 9.0 based on Android 9.0 Pie update started rolling out in India region. The reports are coming out that some of the Honor 10, Honor Play and Honor View 10 smartphone users are getting the OTA update. The update is coming to the mentioned devices after the launch of Honor View 20 (Honor V20) phone. 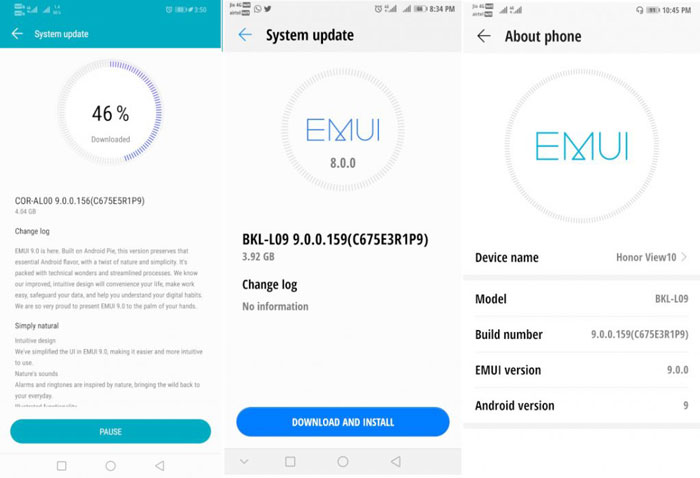 The latest EMUI 9.0 based on Android 9 Pie claiming that the system performance will be improved up to 12.9 percent. This update will also bring some of the native Android Pie features and customized EMUI features. Such as

The OTA update version number will vary from each other depends on device model number. While the update file size will also vary but it could be around 4 GB, which is a big one in terms of the system update. It’s expected to roll-out the Pie update to other countries as well after India. The roll-out process is gradual and it will take some time to receive globally. If you’re a Huawei or Honor device user and your device is on the mentioned list, you have to wait for a few days or weeks.