Just Like the PlayerUnknown’s Battlegrounds (PUBG) mobile game the Fortnite mobile game will also come very soon for the Android version. But there are some device compatibility issues and installation issues as well. As per the XDA Developers report, the Fortnite for Android game will come for Samsung Galaxy Note 9 exclusively. The Galaxy Note 9 will launch on August 9 officially. There are some reports leaked that the game may not be available on Google Play Store officially.

The Fortnite Mobile page on Epic Games’ clearly mentioned on the page source website on how to download and install the game on any Android Smartphone. First of all, the Fortnite for Android game may not be available on Google Play Store. You have to download the file via mobile browser. After downloading the app, you have to sideload the app to install properly and play the game. So, the Android users can’t download and install it simply via Google Play Store.

It is expected that the Fortnite for Android mobile game will be available on Samsung Galaxy Note 9 device for the first 30 days for free. That’s a little bit of awkward in terms of the accessibility and user experience. This is not a convincing way to launch any popular game for Android. However, there are some rumors that the game could be available on Play Store as a beta version, but there is no confirmation about that. 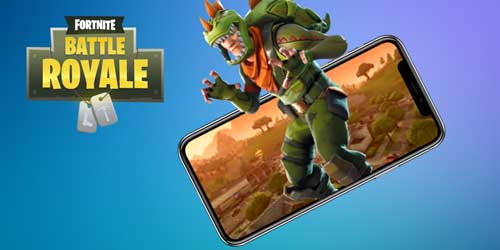 List of Compatible Android Smartphones that support Fortnite for Android

As per the minimum specifications and requirements for Fortnite for Android mobile game seems to have at least Snapdragon 430 CPU, MediaTek MT6737 SOC, Samsung Exynos 7870 chip, HiSilicon Kirin 655 SoC coupled with Adreno 505, Mali-T720 GPU with minimum 3GB of RAM. These are the basic requirements as for now and can hardly handle to run smoothly for a long time. If you’re planning to play this game on an Android device without any frame drops then the below mentioned Android smartphones will definitely stand out great.

However, most of the compatible smartphones are premium and flagship grade among these.