The Xiaomi’s another sub-brand POCO released the Poco F1 flagship-grade smartphone at a very competitive price tag in India a few weeks ago. The device becomes very popular and powerful in terms of the price and hardware specifications. That time Xiaomi announced that the device will run on Poco Launcher along with separate MIUI skin for Poco F1. The company has released the Poco Launcher beta version for testing on Google Play Store and now the official stable version is available on Play Store.

The Poco Launcher has highly appreciated launcher with a pixel like an app drawer and UI. It comes with some cool settings and customization features as well. The traditional MIUI running Xiaomi devices don’t have this type of launcher or app drawer. But now any of the Xiaomi devices or other Android devices can install and use this Poco Launcher official stable version via Google Play Store very easily. The app has been downloaded 5,00,000+ times in a very short period of time and nearly 1,70,000+ APK file installations. 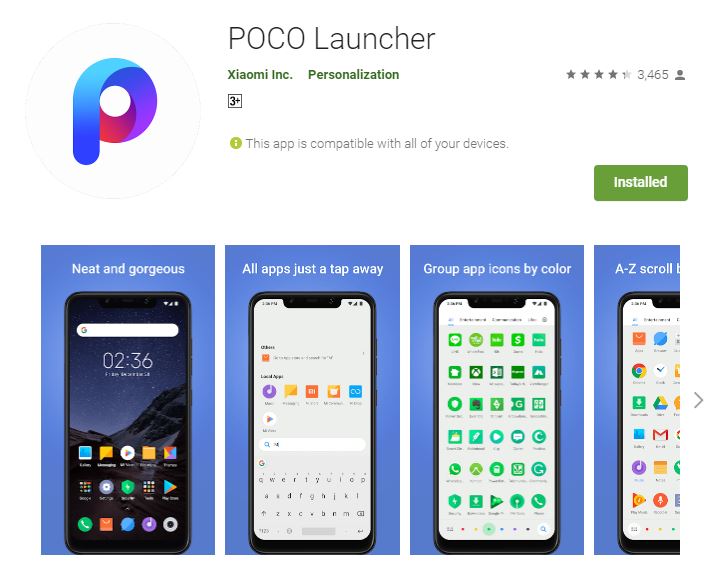 The Poco Launcher is very simple, customizable with recent apps, apps categories, third-party icons etc. Even the launcher does come with inbuilt Poco F1 stock wallpaper which you can choose during setup for the first time. However, this launcher doesn’t have the inbuilt Google Feed yet. The launcher file size is around 11MB which can be increased up to 35MB after installation on your device and that’s a very decent size for any better app.

The main highlight of this launcher is app categories like Lifestyle, Knowledge & Education, Finance & Business, News & Reading, Photography, Tools, Communication, Games, Shopping, and Entertainment. You can even set your apps categories by color as well. The download link is given below. Simply install it and set it as your default launcher if you like it.