Samsung W2019 Flip Phone, the next Android flip phone is on the way to release. This one will be the successor of the last generation Samsung W2018 flip phone. The new Android flip phone model name is confirmed as SM-W2019 and already gets certified with Wi-Fi, dual-band Wi-Fi (2.4GHz+5GHz), and Android 8.1 Oreo as well. The Wi-Fi certificate is issued by the Wi-Fi Alliance.

The Samsung W2019 handset will be powered by the octa-core 2.2GHz Qualcomm Snapdragon 845 SoC which uses the Snapdragon X20 LTE modem coupled with Adreno 630 GPU. 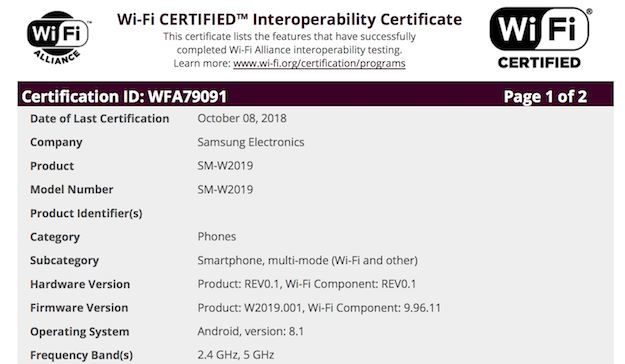 Samsung has already been started the testing process of Android-based firmware compatibility for the SM-W2019 model in early September. The device is expected to launch in December by the end of this year. Because the South Korean tech giant company traditionally launches their new additions of flip phones in December every year.

There is no further information revealed yet. But the Samsung W2019 Android flip phone will be exclusive to China like all of its previous models. In 2018, where all the companies trying to provide higher displays and almost no bezel devices, Samsung still wants to maintain their signature flip phone series with latest Android version and latest flagship processor. Still, the Chinese market is suitable for flip phones.

There are no other details available currently about the launch date and pricing. The previous SM-W2018 model costs Rs.1,56,000 (approx) for the 64GB variant in the Indian market. So, the next model could be priced around CNY 14,500 to CNY 15,000 approximately. However, there is no official announcement made yet. We have to wait for it.

Download Lineage OS 16 Based On Android 9.0 Pie For OnePlus 2