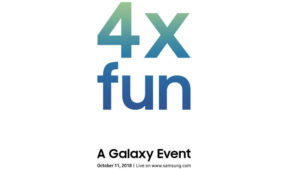 The October event comes as a surprise because it is quite uncanny for Samsung to host an event in the month. The only event that was confirmed by the company was one in November where they were expected to showcase their long-anticipated Galaxy F smartphone.

The official Twitter handle of Samsung mobile has published a tweet with the words 4x Fun along with details about an event on the 11th of October.

The ball is currently in Samsung’s court and is the brand is able to release a mid-range device with exceptional camera performance and a value for money chipset then it may very well take some limelight from the devices releasing in October, the LG V40 ThinQ on the 5th of October, the Pixel 3 on the 9th of October and the Razer Phone 2 on the 10th of October.

The device is expected to be a mid-range device as earlier this year, the president of Samsung’s mobile division DJ Koh said that the brand would be bringing innovative features to its mid-range device earlier than when it brings to its flagship devices as the company struggles to hold its grip amid dwindling sales and fierce competition from Chinese smartphone giants. It is fair to assume that Samsung may pack either a Snapdragon 670 or 710 SoC in the device.

The event would be live-streamed on Samsung’s home page also.