Packaging triple camera set up at the back in a smartphone, it seems, is becoming the new craze among manufacturers.  Samsung, the worlds largest mobile manufacturer is the latest smartphone maker to jump on the triple camera bandwagon with the recently announced Samsung Galaxy A7 (2018).

The tripe lens setup in the Galaxy A7 (2018) offer a 24- MP wide-angle primary shooter, an 8- MP super wide angle lens and a 5MP depth sensor for producing those bokeh effects, which as it happens can be produced using a single camera also.

Samsung has packed their Intelligent Scene Optimizer in the device also, which is basically a cool way of saying that the device would adjust the contrast and brightness and color grading by figuring out what the user is trying to capture.

On the front, the device packs a 24MP selfie camera with an adjustable LED flash. The front camera packs stuff like ‘ AR Emoji’, pro- lightning mode, ‘support for AR filters’ and bokeh mode for portraits.

Being an A series device, the A7 (2018) comes with mid- range specifications like a 6- inch FullHD+ AMOLED display with an aspect ratio of 18.5:9. Furthermore, the device gets 4GB of RAM and an un-named 2.2 GHz octa- core processor. It comes in a maximum storage variant of 128GB with scope for surther expansion also.

The device would be available in blac, gold, pink and blue color. It sports a side- mounted fingerprint sensor and Dolby Atmos powered speakers.

Samsung is yet to unveil the pricing of the device, though more information can be expected at the Galaxy Unpacked event that Samsung is going to hold on the 11th of October 2018 in Malaysia. 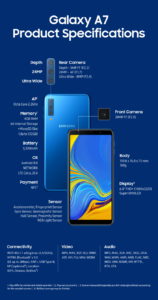 It is quite weird to see, Samsung which has been one of the major forces in smartphone camera innovation, get into the same tow like the Chinese manufacturers out there by making devices which contain features only to sell, and of no value to the user. Samsung copying Apple’s camera placement was something that was never expected from the brand.