The Oppo sub-brand Realme has started ColorOS firmware update via OTA to Realme 2 Pro devices in India. A few days ago, the company also rolled out the software update to Realme 2 and Realme C1 devices officially.

The new OTA update to Realme 2 Pro handsets brings a lot of new software optimizations and improvements with ColorOS. Earlier this update, the ColorOS running devices weren’t able to dismiss notifications in bulk from the notification panel. There are some more bugs or issues reported by the users and now the company brings an update to fix all those bugs. This OTA update brings single swipe notification dismissal, headset icon in the status bar while calling, improvements in Developer Option and Accessibility mode. 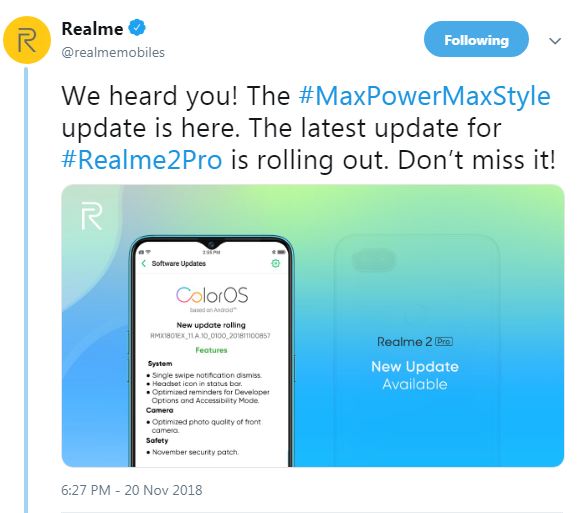 Just like every update, all the Realme 2 Pro devices will get the update very soon but in some batches. So, the users could have to wait for a few days to receive the OTA update notification. The company also mentioned that some of the users were facing battery draining issue previously but now with this update, the issue is now fixed through an update to the TouchPal Keyboard app.

With the new latest November Security Patch update, the ColorOS 5.2 version will perform well. Still, there are a few Oppo devices available in the market which are yet to receive the ColorOS 5.2 update over Android Oreo. As we mentioned in an earlier post that Oppo recently introduced AI-based ColorOS 6.0 UI for future devices. So, maybe the next update will bring a lot more improvements and customizations to the Oppo and Realme devices along with Android 9 Pie OS.