Motorola has been extremely successful in the mid-range segment for the past few years. The Moto G4 Plus was very successful and the G5 Plus launched as a worthy successor. After many leaks regarding the Moto G6 Plus, we finally have key information on the device.

Moto on the G series has always opted to go with power efficient Snapdragon chipsets. The Moto G5 Plus came with the Snapdragon 625 SoC instead of the Snapdragon 652 SoC, which was much more powerful. But that may well change this time around. A Geekbench listing has revealed that the G6 Plus will indeed be powered by the Snapdragon 660 SoC, which is clocked in at 2.21GHz. 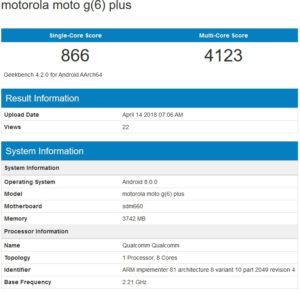 The Moto G6 Plus is expected to come with a 6-inch Full HD+ display with a resolution of 18:9. It will reportedly come in 4GB/6GB RAM and 32GB/64GB ROM options. The smartphone will be fuelled by a 3,200 mAh battery with support for Quick charging. As for optics, a dual 12MP+5MP setup is expected t make its way to the rear of the smartphone.

However, inspite of sporting the Snapdragon 660, the scores do not seem impressive. The Single-Core score is just 866 and the Multi-Core score is just over 4200 points. Since the SoC is not visibly under-clocked, these scores maybe due to the early testing software run on the handset.

Motorola Moto E5 Plus with Snapdragon 430 spotted on Geekbench