Finally Samsung the king of android phone market space has announced long-awaited Samsung Galaxy Note 9 successor to the previous year highly popular premium Samsung Galaxy Note 8 smartphone.
So let’s have a look at the king.
Just like any other premium range smartphone Galaxy Note 9 comes equipped with fastest and greatest Snapdragon 845 processor with 6GB and 8 GB RAM options with Adreno 630 GPU a tall QHD+ AMOLED display with a resolution of 1440×2960 and 516 PPI pixel density. 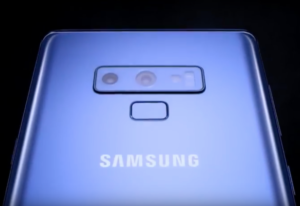 The design is also what you may have expected from a 2018 smartphone a glass sandwich design with an aluminum rail around the body. it looks premium and builds quality would be great as you expect from a big name like Samsung though the device looks too similar to Galaxy Note 8, we might go as far as to say they look identical except the fingerprint scanner located at the back of the device which is now below the camera setup, which raises some concerns but overall the phone looks elegant and gorgeous.
Moving on to the camera and we find the same story here that the setup is near identical to last year’s Galaxy Note 8 with dual 12 MP camera setup.

The primary camera has a variable aperture which helps with different lightening setting while the second camera is a zoom lens with 2x optical zoom and helps with portrait or bokeh effect. Though the new thing is with video recording where we can finally shoot 4k videos @ 60fps. While front camera is of 8MP and has bokeh effect and can shoot 1440p videos @ 30 fps.

Last is battery and now you can carelessly leave your charger behind at home because Note 9 got you covered with its 4000 mAH battery which will guarantee you a full day of use on your device under mid and high load.

LG starts rolling out Android Oreo for G6 in India