by Anant Vignesh
in News

So far, 2017 has been a roller-coaster year in the world of smartphones. We have seen some really great phones since the beginning of the year like Galaxy S8, HTC U11, LG G6, Oneplus 5 and some of the latest additions such as the Essential phone. But the year has not come to an end yet and we are expecting a lot from the next 5 months. Some of the big launches like Pixel 2 and iPhone Edition are around the corner which makes us feel like “The best is yet to come”.

The first one that is yet to come in the line of exciting events is the official launch of Android O by Google which is expected on August 21st 2017 (Tomorrow). Google has been prepping up for the new iteration of Android for quite some time now, constantly releasing developer previews.

Must Read: What Could Be The Name Of Android 8.0 ? Android Naming History

And after the last preview that was made available in July, the next thing to expect would be the official live streaming of the same, where Google would be revealing Android O to the world.

From what is being shown on Android’s official website, Google is planning to “touchdown” with the new version of Android OS, in all its glory, on 21st August. The date of the launch of Android O coincides with the total solar eclipse that would sweep across the whole of United States.

Is It Oreo Or Octopus?

If Google’s filename for the teaser android video is to be believed (which was by-mistake posted on Google+), Android O might actually be called Android Oreo. But this is not very surprising as Google’s naming convention for it’s Android OS has always been associated with some tasty treat. 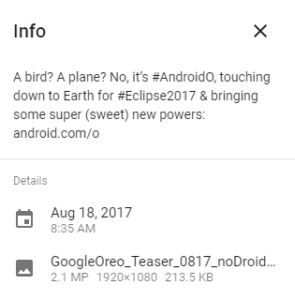 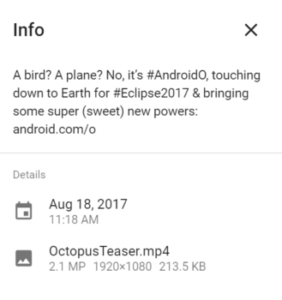 But this time, there might be a small change that is expected now in the trend. Along with setting our clocks for 2:40PM ET, Google has released some info on what its next Android version might actually be called. The post that had “GoogleOreo_Teaser_0817_noDroids (1).mp4” was soon deleted and another one was posted, in which the filename  “GoogleOreo_Teaser_0817_noDroids (1).mp4” was replaced with “Octopus Teaser.mp4”.

Like we said earlier, some of the big launches like Pixel 2 and iPhone Edition are around the corner which makes us feel like “The best is yet to come” or may be not. But we have high hopes and expectations just like any other geek out there for the final battle of pure stock Android in Pixel 2 vs the one and only iOS 11 in iPhone Edition.

How to Enable Daydream VR On Any Android Nougat Device

[MOD] How To Enable Dual Speakers On LG G6

I want to be a full time foodie, medium time freelance developer and a blogger and a part time software engineer in an IT MNC. Unfortunately the reality is exactly the opposite. But having high hopes to turn my destiny around.

[MOD] How To Enable Dual Speakers On LG G6