by Varun Kesari
in Android Tools, How To Guides, Tweaks

As for the hardware that mounts the new flagship of Google, say that the features of the Google Pixel 2 XL extol it in the highest range of the sector. In this way, the phone has a screen consisting of a 6-inch AMOLED panel that reaches a resolution of 1440 x 2880 pixels and 18: 9 and 538 dpi that offers excellent image quality.

Under the hood, we find the jewel in the crown of Qualcomm. We are talking about the Snapdragon 835 processor, which together with the 4 GB of the device ensures that the performance of the Google Pixel 2 XL is equal to any of its competitors.

Continuing with the rest of the hardware of the Google Pixel 2 XL, the phone mounts a main camera consisting of a 12 megapixel lens with f / 1.8 aperture, autofocus by laser, optical image stabilization plus dual LED flash that has converted to Google Pixel 2 XL on the phone with the best camera on the market . Its 8-megapixel front camera with f / 2.4 aperture will be more than enough to perform selfie and quality video calls. To this must be added a battery of 3,520 mAh, with the rapid charging system, which will be in charge of supporting the full weight of the hardware of this Pixel 2 XL.

And we can not forget some of the most remarkable features, such as the fingerprint sensor that mounts on the back or the technologies Active Edge, Always Display or Google Lens that come standard on this phone. The Google Pixel 2 XL, which will arrive with Android 8.0 Oreo as a version of Google’s operating system, will have two versions with 64 and 128 GB of internal storage.

Highlight the IP67 certification that endows the terminal with resistance to dust and water. The previous model was only resistant to splashes so we must thank Google that has improved the certification of the Pixel 2 XL since most high-end phones have this feature.

To end with the section of technical features of the Google Pixel 2 XL we want to make special mention of its two stereo speakers located on the front of the new Google phone and we are invited to enjoy multimedia content in its impressive screen of 6 inches. A perfect combination to watch movies or enjoy video games in company with great sound quality.

Well, although we had seen some small progress on this feature a few days ago in XDA Developers, now we have known how they work alternatively these indicators of Bluetooth devices that tell us what level of the battery is left in real time. An interface that is not yet fully integrated into the operating system, but can already be used. You can now view this information in the ” paired devices ” menu in the Bluetooth settings panel. 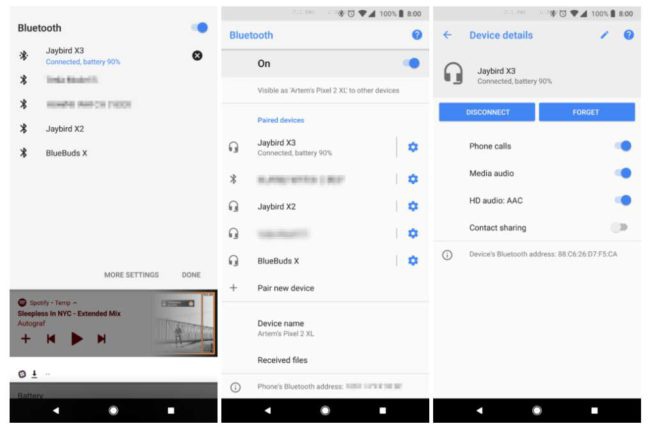 Within the details of the device in this section, you can see the battery level of the device connected to Pixel 2. As you can see in the capture above, the Jaybird X3 device is shown connected by Bluetooth, and below its description shows that the battery level is at 90%, so it is certainly an interesting way to know the level of the battery. As you can see below it seems that the ultimate goal of Google is that we can see the Bluetooth battery indicators in a way as graphical as the one that shows even the image of the device, and integrated into the same notification bar, although not now are shown well, the option is very hidden.

At the moment this option has been tested on the Jaybird X1, X2, X3 and Run headphones, so functionality is also available for devices other than official Google devices. What is clear is that at the moment how to show the battery level of the integrated Bluetooth devices in the notifications is not yet visible to users of Pixel 2, it seems that is there, but not yet enabled. But as you can see, there is still a way to know the battery level of other devices. We will see when this option is integrated in a simpler way in the interface of the Pixel 2 and in general of all Android terminals.