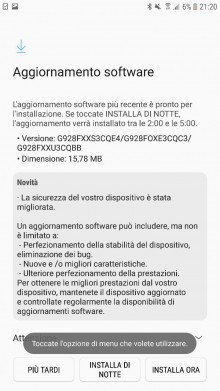 The update has arrived via an OTA update to all the Samsung Galaxy S6 Edge Plus users in Europe and the update has reportedly arrived with the May security patch. This means that the Samsung Galaxy S6 Edge Plus will be running the latest security patch which is from May after the update. As usual is the case with all the OTA updates however big or small, there are always some bug fixes and performance improvements along with the bump in the security patch number so expect the bugs from your phone to disappear after the update. The update size is of 15MB so we don’t expect any major things in the update other than the usual stuff.

Like usual, the OTA is rolling out in stages (country-by-country), so it could take a while to arrive on your Galaxy S6 edge Plus. If you’d like to manually check to see if the update is ready for your device, open up Settings, navigate into Software Update, then press Download Updates Manually. If it’s not, don’t panic: it should arrive by the end of the week. Stay tuned for more on this.

How to Downgrade Honor 6x from Android Nougat to Marshmallow