Traditionally when smartphones are spotted in FCC listings, it is safe to say that their launch is just around the corner. A smartphone with model number SM-J720 which is presumed to be the Galaxy J7(2018) has appeared on FCC’s website. It is worthy to note that the smartphone has also appeared on Geekbench, thus confirming the device details.

Firstly, there is info on the physical appearance of the device. The Galaxy J7(2018) will have dimensions of 153mm X 76mm and will diagonally spread over 126mm. 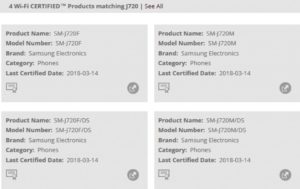 The handset will sport a 5.5inch display. There are no further details about the panel and it is expected to retain the 16:9 aspect ratio with considerable top an bottom bezels.

It will be powered by the in-house Exynos 7885 SoC coupled with the Mali-G71 GPU. The chipset is built in the 14nm manufacturing process and is an octa-core SoC clocked in at 1.6GHz. However, the chipset is yet to be announced by Samsung and has also appeared powering the Galaxy A5(2018). This is backed up by 3GB of RAM and storage information is unknown.

We can expect the chipset to have a few AI features that are appearing in all smartphones nowadays irrespective of the price bracket. A single rear camera is expected followed by a selfie shooter.