The OnePlus 3 and OnePlus 3T recently spotted on Geekbench benchmark test running on Android 9 Pie. OnePlus is the second most non-Pixel smartphone brand after Essential PH to deliver frequent updates in the flagship category. While we have a list of other budget segments Android One running devices as well which offers the latest Android updates. Such as Mi A2, Mi A1, Moto One Power, All Nokia smartphones, etc. Last year in 2018, OnePlus announced that OnePlus 3 and OnePlus 3T will be eligible for getting Android Pie update soon including OnePlus 5 and OnePlus 5T. That was a great surprise for all the OnePlus users and OnePlus lovers.

Must Read: Here is the expected list of Android 9 Pie smartphones: Check out your device model

Both the OnePlus 3 and OnePlus 3T devices launched with Android 6.0 Marshmallow version. These two devices were the flagship at that time. Then the devices got major Android updates of Nougat and Oreo in two years. In addition, the company also provides OxygenOS updates and the latest Security Patch updates periodically. While most of the flagship smartphone manufacturers don’t provide Android updates more than one or two major updates. In 2019, we are talking about Pie update possibilities to OnePlus 3 and 3T devices. 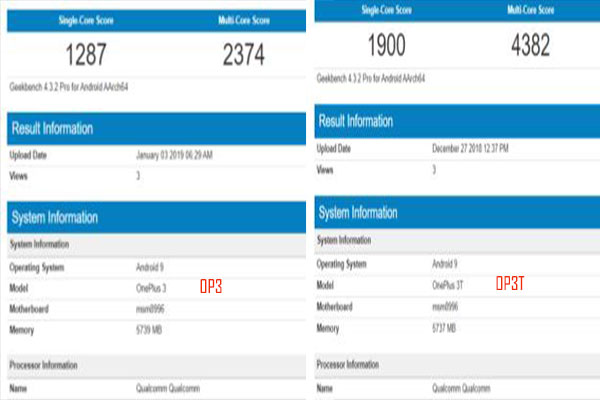 Recently, the Android 9 Pie running OnePlus 3 and OnePlus 3T spotted on Geekbench benchmark test on January 3 this year. That means both the devices will soon get the major Android update with the latest security patch. Currently, the OnePlus 3 and OnePlus 3T devices running on OxygenOS 5.0.8 version based on Android 8.0 Oreo. OnePlus a few months ago canceled the roll-out process of Android 8.1 Oreo for these two devices. There was some uncertainty at that time, but now it’s clear and already spotted.

For a quick look on OnePlus 3 and OnePlus 3T specifications, both the devices have a 5.5-inch display with the 1920×1080 resolution. Both have a front-facing fingerprint sensor, single 16MP rear camera with LED. While the OP3 has an 8MP selfie camera and OP3T has a 16MP selfie camera. The OP3 powered by Snapdragon 820 SoC with a 3,000 mAh battery, while OP3T features Snapdragon 821 SoC with a 3,400 mAh battery.

How to Install OnePlus Launcher on Any Android Pie Device (Root)

How to Use Custom Fonts on Samsung Galaxy Devices, Android 7.0 or Above