Reliance has been planning to launch the Jio Fiber service in India which is a high-speed internet facility with speeds up to 70 to 100 Mbps of data. Reliance Jio has already grown leaps and bounds in India with the Jio mobile services operating in the country and the service has already gained over 100million subscribers. As far as the Reliance Jio mobile services are concerned, the telecom operator is offering 1GB data every day with free voice calls as well as sms to all the users on their network. In return, the company charges Rs. 309 which is equivalent to $5 every month. This offers from the company for such a low price have helped the company gain popularity and have successfully sustained for one year in the industry.

Now, we have already received reports that the company is entering the Wi-Fi industry by giving door-to-door services in India. Apart from the Wi-Fi services, the company will provide this data with higher speeds which equal to the speeds of the Fiber network and the services will be given through the fiber cables as well. Although we don’t know the exact details of the company’s plans to launch the Fiber network, we have known that it will happen soon. 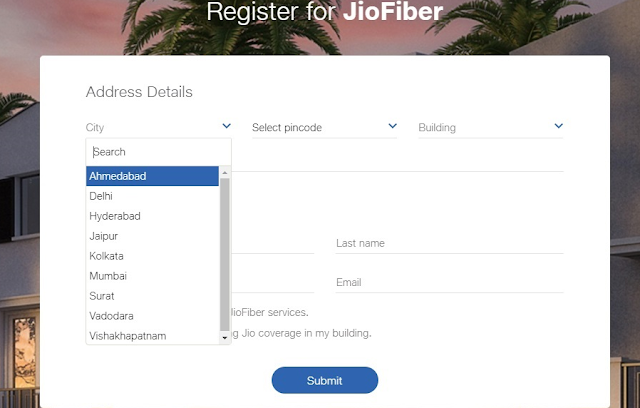 However, we have received some leaked screenshots from the company’s official website which have been accessed by a Redditor. This shows the list of cities in India where the Jio Fiber will launch initially and the list includes the Indian capital Delhi. The other cities include Ahmedabad, Mumbai, Vadodara, Surat, Kolkata, Jaipur, Vishakhapatnam and Hyderabad. After the screenshot was posted on Reddit, the company has removed the page from its website which leads us to believe that the company is still working on the service to launch it soon in the listed cities. Stay tuned to know more about the Jio Fiber service.

What Could Be The Name Of Android 8.0 ? Android Naming History