After so many rumors for some weeks and after the launch of Oppo Find X device, the Chinese smartphone manufacturer is prepared for their another flagship smartphone called Oppo R17. The device will be launched on August 18 and the actual price will be announced on the same day and the device could be available for sale on the same day at 10:00 as per official website details. The device is now listed on TENAA and Weibo with almost 91.5% screen-to-body ratio display. Let’s talk about the smartphone specs.

This time Oppo designed a different notch style which contains only a single front camera, just like the Essential Phone notch design. However, the notch seems bit smaller than the Essential Phone and it’s quite like a mid-circular or waterdrop styled notch without any earpiece or sensor. The Oppo F9 Pro also contains the same notch. 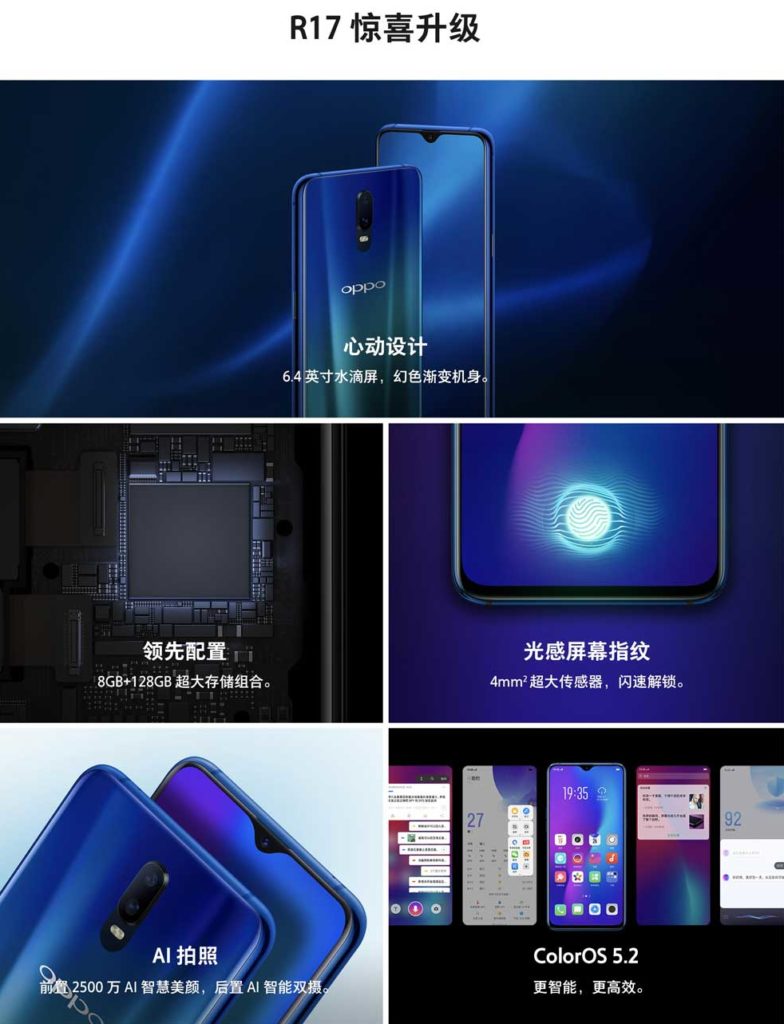 The Oppo R17 will come with a massive 6.4-inch Full HD+ FullView 19:9 aspect ratio notched display. The display resolution will be 2280×1080 pixels, protected with Corning Gorilla Glass 6 on the top. The handset does have the In-Display Fingerprint Sensor instead of the physical fingerprint sensor.

Under the hood, the smartphone will be powered by Octa-Core 10nm based Qualcomm Snapdragon 670 chipset coupled with Adreno 615 GPU, 8GB RAM, and 128GB internal storage variant. The device will run on Android 8.1 Oreo with ColorOS 5.2 UI out of the box pack. The Oppo R17 could come with a dual rear camera setup of a 16MP primary and a 5MP secondary sensor with LED flash and Super Night Mode feature. On the other side, the front could feature a single 25MP AI camera with Sony IMX576 sensor, f/2.0 aperture lens, and 3D portrait mode with so many extra features. The device could have the AI 3D Face Unlock option with 3D Emoji and object tracking mode as well.

The handset will sport a 3,500mAh battery with VOOC Flash Charging, which can provide 2 hours of talk time on 5 minutes of charge. There is no information about the other specifications and features yet. However, we can expect the 3.5mm audio jack, USB Type-C port, Bluetooth 5.0 LE, Wi-Fi 802.11ac (dual band), Wi-Fi Direct, GPS, A-GPS, GLONASS, NFC, dual 4G, Wireless Charging etc. with all major sensors. As the device doesn’t have an earpiece on the front, so it might be possible that the company could provide some ultrasonic wave sensing technology for audio.

Please keep in mind, that this is not the official announcement. The device will be available in two color options like Twilight Blue and Starry Purple. There is no confirmation about the other RAM or storage variant availability including the actual price tag. We have to wait for the official launch.