The Nokia 8 was the first flagship offered by HMD Global when it brought the Nokia brand back into the smartphone world. The device was released in August last year and came under the budget flagship category competing with the likes of the OnePlus 5, the Mi 6 etc among others.

HMD Global has managed to carve a name in the name smartphone market owing to the pace with which they deliver the update to their smartphones. They have so far managed a really well track record of providing the monthly OS patches along with the Android updates. The Nokia 8, however for its price seems the only week link in the company’s update rollout so far. The device received the camera update, which brought the Nokia Pro Camera mode, quite late as compared to another device with Zeiss optics. It is still not one of the first devices to get the monthly security patches. Even the Nokia 6 and the Nokia 5 which were released prior to it, receive most of the monthly patches before it.

When the customers, unhappy over this fact, took to Twitter, Juho Sarvikas, the CPO of HMD Global in a tweet revealed that the Nokia 8 would be getting most of these features with the upcoming Android 9.0 Pie update.

Hey let’s not get carried away here 😀. We already issued a camera update and you will shortly get another one with Pie with new experiences. Also ARcore support is there, 8., Etc… Facial unlock we haven’t rolled out yet to our products as we are still evaluating solutions.

It has been revealed that the Nokia 8 would be getting the ARCore support along with the camera update which was released by HMD Global for the Nokia 7 Plus and Nokia 8 Sirocco a few weeks ago would be arriving along with the Android 9.0 Pie for the device.

In the tweet, Juho Sarvikas also mentioned that HMD Global is still working on evaluating a facial unlock for their products. So far, the only face unlocks available for Nokia smartphones users is the one that is provided by Google through the Android Smart Lock feature. 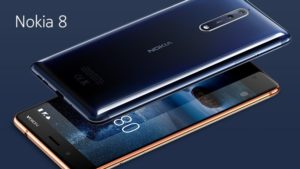 Moto G6 Plus launched in India with Snapdragon 630 SoC: an overpriced device