The indications of Nokia working on the Nokia 7.1 Plus have been popping for quite some time, with a device codenamed, “Pheonix” having been already seen on Foxconn’s DB earlier this year.

The device now has the image of its front panel leaked. The leaked image seems to suggest that the Nokia 7.1 Plus would be housing a 5.9- inch FullHD+ IPS LCD display panel with the device carrying forward its predecessor’s 18:9 aspect ratio. 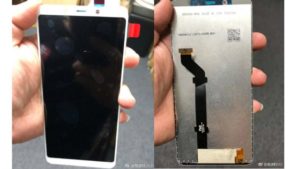 The device may have further reduced the bezels on the side, and a narrower chin at the bottom, which was an issue with the Nokia 7 Plus despite its larger 18:9 aspect ratio.

Nokia 7.1 Plus is expected to come with support for 18W fast charging and may be housing the same 3800 mAh battery like its predecessor, or an expanded 4,000 mAh one.

When it comes to optics, the Nokia 7.1 Plus would house the same 3- cameras overall like the Nokia 7 Plus, with all the three lenses provided by Zeiss once- again, with a single- selfie camera and dual cameras on the back.

The Nokia 7.1 Plus is also expected to launch imminently, as Nokia’s Taiwan page has released teasers for two devices, with one of the images featuring a device which is almost similar to the Nokia 7.1 Plus’ leaked image.

Nokia 7.1 Plus would be having the same 4GB and 64GB memory and storage configuration, with a 6GB+ 64GB version also possible.