Opp has yet to release a new smartphone for this year in India which is one of the biggest smartphone markets for the company other than China. As far as Oppo is concerned, the company has been gathering tremendous response from the public and they have also managed to convert these into sales as well. We have known that the Oppo smartphones are known in India for being selfie-centric smartphones and this is due to the fact that the company focuses more on the front cameras on their flagships rather than the primary camera. Now, it is understood that the company is going to launch the latest smartphone very soon.

As far as the latest smartphone from Oppo is concerned, this smartphone will be named as the Oppo F7 and the smartphone will be the latest flagship smartphone from Oppo in its F series of smartphones. As far as the release of the Oppo F7 is concerned, the company has started to share teasers of the latest smartphone along with a unique aspect of using Indian cricket team’s players to market the phone. For those of you who don’t know, Oppo had secured the main sponsorship rights of the Indian cricket team last year and is currently the main sponsor of the Indian Nationa Cricket Team. 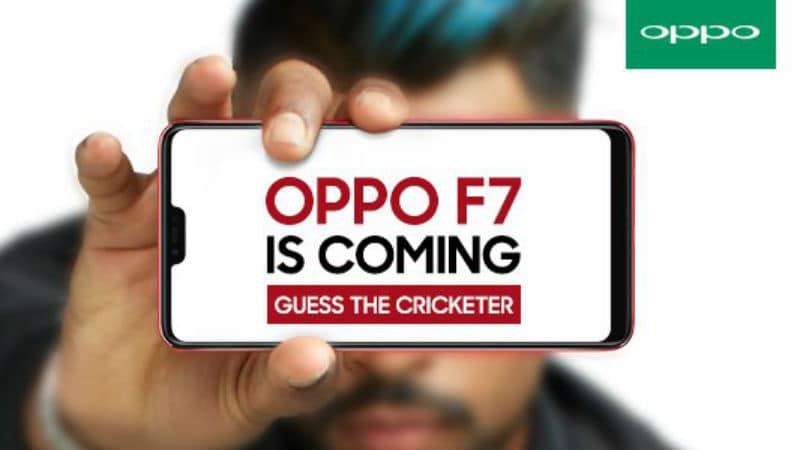 As far as the first teaser from Oppo is concerned, the company has asked its fans to guess the name of the Indian Cricketer behind the smartphone. In terms of guessing the cricketer, it is none other than Hardik Pandya, the dynamic all-rounder who has made his name recently in the team. Focusing on the Oppo F7 in the front, we can see the smartphone having a Full View display along with a Notch same as the iPhone X. Apart from that, the Oppo F7 will be released in India on March 27.