Huawei is expected to launch the P20 in a couple of weeks and we already know some key information regarding the device. The smartphone will bring a “Notch” on the display along with a fingerprint scanner on the front of the display. Now, the Geekbench scores of the device have been leaked.

Huawei devices are always powered by the in-bouse Kirin SoC’s unlike many other Android manufacturers who opt to go with Qualcomm’s Snapdragon line. It is no different this time around and the Huawei P20 will be powered by the Kirin 970 SoC. 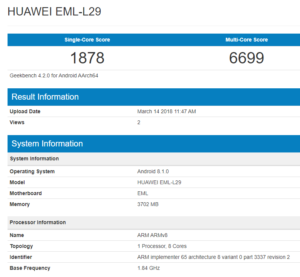 From the benchmark results, the Kirin 970 scores 1878 points on the Single-Core and 6699 points on the Multi-Core. This is quite disappointing to say the least as this directly compares with the Snapdragon 835 SoC, which is a flagship chipset from last year. It is also worthy to note that the OnePlus 5T with the SD 835 scores over 1900 points on Single Core.

It is also worthy to note that the Huawei P20 directly competes with the Samsung Galaxy S9 series which come with an incredibly powerful Exynos 9810 chipset. For some reference, the S9 scores over 3500 in the Single Core test and over 8800 in the Multi Core test.

Having said all that, benchmarks are not everything and do not always translate to real world performance. System Optimisation is something that is more important and it is crucial that Huawei figure it out with the P20.

The Kirin 970 will be coupled with 4GB of RAM and the handset will come with Android 8.1 out-of-the box. It is expected to launch on March 27.