HMD Global, the new home of Nokia mobiles, has launched the entry-level Nokia 1 in India. Starting from 28 March, the device would be available on all major mobile retailers in India according to HMD Global. The device would have an effective retail price of Rs. 5499.

The Nokia 1 was announced by HMD Global at the MWC’2018. The device has modest specifications which include 1GB RAM, 8GB ROM, and a quad-core 1.1GHz MediaTek processor. The phone has a dual- tone design with a nice looking white border. The device runs on the Android Oreo Go Edition, a lightweight Android OS by Google specifically for 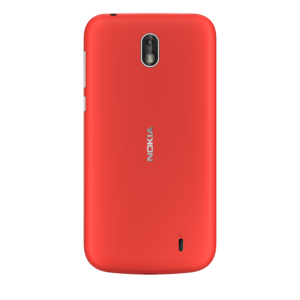 devices with RAM less than, equal to 1GB. The OS contains stripped down version of popular apps like Google Maps, Google Assistant, Gmail, and would be conservative when it comes to mobile data usage also. A 2,150 mAh battery up to 15days standby time. For the display, there is a 4.5- inch FWVGA display. The device will support 4G LTE, giving it the ability to place HD video calls through any VoLTE provider.

The device is a bit reminiscent of the Nokia Xpress Music devices, and it contains removable back which can be customized using Xpress on covers which would be available starting April’2018 for a price of Rs. 450.

In an official statement, while launching the device, Ajay Mehta, the Vice President India of HMD Global said that “There are more than 1.3 billion feature phone users around the world, many from markets in Asia and Africa. As the value market leader in feature phones, we understand the barriers and challenges people face when it comes to stepping up to a smartphone which is where the Nokia 1 fits in perfectly. Not only is this our most affordable smartphone ever, it also combines the reassuring quality and design of a Nokia smartphone with the latest Android Oreo (Go edition) to deliver exceptional value and realize our dream of creating a complete smartphone experience that is accessible to everyone.”